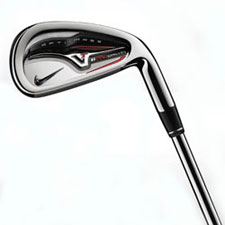 The Nike VR Pro Irons for sale have a new pocket cavity design that gives a higher trajectory on longer shots. They also feature a split cavity technology that gives exceptional workability. The blades give a strong feel on the short game. More grooves that are closer together conform to all the new USGA and R&A regulations and work for optimum flight control and more consistency between shots. The CG progresses seamlessly throughout the set giving more control and better launch. The face is a finished iron that goes through an advanced milling process leaving it amazingly flat and then die-stamped to imprint grooves making a very low variable between irons and improving the consistency of each shot in every round. The featured shaft is the True Temper Dynamic Gold in either X100, S300, or R300.

The Nike VR Pro Irons for sale are one of the hottest sets of irons and surely the most buzz worthy from Nike so far to date. These clubs have an amazing progression throughout the set starting with the pocket-cavity 3 and 4 long irons to the split-cavity middle 5-7 irons and ending with the muscle back short 8-PW irons. This progression through the set is consistent and gives ultimate workability no matter what type of shot is being made. The long irons have a super high trajectory and launch and the mid and short irons have superior control and feel amazing to swing. The new groove design really does a lot for controlling distance and speeds. They are also really durable since they are made out of 1025 carbon steel and they meet the brand new standards set by the USGA. There is still the reliable perimeter weighting that Nike accomplishes so well in their irons that leaves this set very forgiving while not compromising the solid feel and control over the ball.