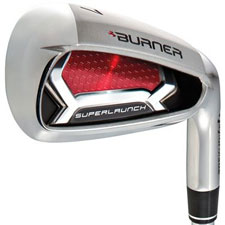 The TaylorMade Burner SuperLaunch irons have inverted cone technology that increases the ball speed on mis-hits giving better control and consistent distance. Featuring an extra-wide sole, balls are easy to launch high off the ground right at the start. The long iron design makes for high MOI and low CG which also contributes to the superior launch of the ball. The perimeter weighting is the most extreme of all TaylorMade's irons which is yet another factor in the increased launch.

Golfers looking for the ultimate forgiveness in an iron along with exceptional launch should look no further than the TaylorMade Burner SuperLaunch series. These irons have helped numerous golfers take their game to the next level. Anyone struggling with low ball flight will truly appreciate the launch and elevation they can get out of using this iron. Inconsistent golfers and those with a high handicap will benefit from the SuperLaunch. The wide sole gives the low and deep CG location but is also beveled to decrease friction and resistance with the turf. The grooves on the head are compliant with and meet the 2010 USGA standards. The face thickness throughout the entire series promotes optimum ball speed even for those with slower swing speeds. Even slow swingers will achieve superior launch and enough ball spin to keep the ball soaring in the air for a significant carry time. Mis-hits from the SuperLaunch series are hardly noticeable and accuracy improves greatly thanks to the progressive inverted cone technology.