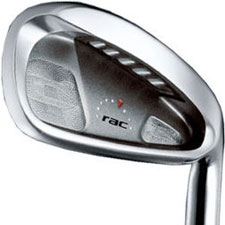 The Taylor Made rac HT irons have a special tuned performance cartridge that is inserted into the cavity's lower rim. This take the weight and redistributes it to the club head perimeter from the sole. This makes for optimum MOI, or moment of inertia, giving exceptional stability and mis-hit forgiveness. The MOI is also higher due to a larger cartridge. There is little resistance with the turf thanks to the chambered head and wide sole. This same wide sole lowers the COG, or center of gravity, increasing the carry of the ball. The wide sole also moves the weight low and back creating optimum launch and lift.

The quality of the Taylor Made rac HT irons does not disappoint. Just like every other iron in the Taylor Made family, the rac HTs have superior stability and feel that can improve a golfer's game no matter what level they are on. Fine tuning technique has never been easier than with a Taylor Made rac HT club. The fit and feel of the shaft in a player's grip is exceptional. With a solid connection from the head of the club to the ball along with superior lift, launch, and carry, the rac HTs are a favorite among golfers everywhere. One of the best qualities of these irons are their forgiveness of mis-hits. They have optimum accuracy as well and make for improving the quality and consistency between shots for even the novice golfer. The weight distribution in the club head is so progressive that the MOI is instantly increased which then makes for an almost effortless yet satisfying swing.