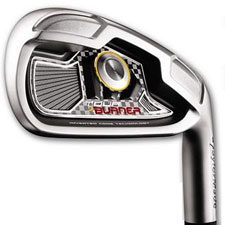 TaylorMade Tour Burner irons have superior burner distance with tour playability. The multi-functional sole features a beveled playing head and trailing edge that gives the versatility of a thin sole along with the launch of a low CG. The moderate top-line along with the intermediate offset creates a crisp and traditional appearance but also boasts exceptional playability. The face if thin and fast at just 2.2 milliliters thick. A high COR provides optimum distance and faster ball speeds. TaylorMade's signature inverted cone technology widens the club face which makes for optimum launch and consistent speeds on off-center hits. The low and deep center of gravity also improves launch and powers the ball down the intended trajectory. The TaylorMade Tour Burner irons are equipped with SuperFast Technology that includes a longer, lighter shaft, lighter grips, larger and more forgiving club heads, and higher launch rates.

Golfers with a wide range of handicaps and experience levels have found supreme playability with the TaylorMade Tour Burner irons. Golfers rave about the versatility of the clubs as well as their forgiveness and accuracy. The ability to play through a consistent round despite mis-hits and off-center shots is a big plus. The feel of the Tour Burners is solid yet there is great shock absorption in the solid steel shafts. The immediate launch along with the increased ball velocity can improve any struggling golfer's game. The long irons have shown to hit the ball 15 to 20 yards farther than other irons. TaylorMade Tour Burners also look great and have a satisfying chrome finish.