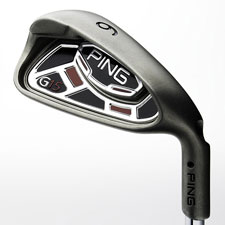 Looking for a Set of Clubs With Maximum Forgiveness? Then the Ping G15 is for you.

Golfers know that forgiveness is the name of the game. Every club allows for a certain amount of forgiveness when hit, or actually mishit, and it's up to each individual player to know how much forgiveness they need in their own game.

When Ping designed the G15 drivers, hybrids, and irons, they targeted players who are looking for maximum forgiveness without sacrificing distance or accuracy. Players can feel the difference in the titanium head design of the driver, which is longer from the front to the back. The G15 also features Ping's ultra-thin crown technology. But Ping didn't just slim down the club. They actually put the missing weight back into the driver as an external sole weight. This feature maximizes the Center of Gravity (CG), allowing the ball to go higher with less spin.

Balls also travel faster with increased MOIs (Moment of Inertia) thanks to the high-balance-point shaft of the G15 driver. The head mass has actually gained approximately five grams due to this new technology. In the iron, approximately seven grams have been reallocated thanks to a new Custom Tuning Port.

What does this mean to you? When you carry these Ping G15 golf clubs for sale, you'll see your balls fly higher when hit, and then you'll enjoy straighter drives. You'll be amazed at how much control you have with the entire line of clubs, especially your G15 driver.

In fact, you'll feel the difference from the minute you swing the club back, especially if you're a mid-to-high handicapper. The new weighting is actually discernible to the eye. Just one look at the wider sole will tell you that you're about to launch your next shot with more power and authority. Plus, you'll love the consistent feel of all the Ping G15 golf clubs.

Don't lose your composure every time you mishit a ball. Buy these G15 golf clubs for sale and put more forgiveness into every swing.